Tatami mat has a simple structure with the inner core, tatami-doko・the surface material, known as the tatami-omote・the border material, tatami-beri.

Tatami mat is woven with “the inner core, tatami-doko” made by tightening and compressing layers of rice straw and weaving natural RushGrass into the warp to create “the surface material, known as It is made by covering the tatami-omote from above and sewing the border material, tatami-beri on the long side.
Today, with the advancement of science and technology, and changes in housing conditions and needs, various materials have come to be used. However, the basic structure and manufacturing method of the Tatami mat itself has not changed since ancient times.

Introducing the characteristics of “the inner core, tatami-doko,” “the surface material, known as the tatami-omote,” and “the border material, tatami-beri.”

straw bed
The straw bed is the best tatami-doko that has been used since ancient times.

It is made by stacking many layers of rice straw, which can be as large as 40 centimeters when piled up, compressing them to about 5 centimeters, and sewing them up.

As a feature, it has excellent humidity control function, soundproofing, fireproofing, heat insulation, durability, and resilience.
In Japan’s National Treasure “Daitokuji Hojo”, there are 112 Tatami mats with the inscription of the 13th year of Kan’ei (1673). The durability of rice straw Tatami mat is recognized by history.

Straw bed rank
The quality standards for rice straw tatami-doko are graded from special grade to grade 3.
As a guideline, it is said to be good to have a lot of rice straw and a lot of layers of straw.

High-grade rice straws are neatly arranged and sewn together without crushing the straw, so the thickness is uniform and uniform.
In addition, the layers of straw are solid and finely sewn, so it has excellent resilience. It can be said that it lasts as long as the product and is rather economical.

Straw sand (Styro floor)
It is a floor made of polystyrene foam sandwiched between straws, and while it has a feel similar to that of a straw bed, it is lighter and more resistant to moisture than a straw bed.
The same can be said for straw beds, but the quality of the straw and the work process, such as the fineness of the seams, determine the grade of the floor. If the grade is even lower, there is also a floor that is compressed by inserting fine gomoku (finely chopped straw) between the upper and lower straws.

Construction material floor (chemical floor)
The floor is made of an insulator board made by compressing fine wood and polystyrene foam.
It is characterized by its low cost, light weight, excellent heat insulation and moisture resistance, and its resistance to mites.
However, compared to the straw floor, it is harder to touch, and foam-filled floors are somewhat less durable.

Effect of Rush Grass
Cross section of RushGrass
The inside of RushGrass is spongy and has countless holes, which have the property of absorbing harmful substances such as nitrogen dioxide in the air. In addition, it has the effect of purifying the air, such as removing unpleasant odors such as ammonia.
In addition, the scent of RushGrass has a relaxing effect on people, and experimental results have shown that Tatami mat rooms have a higher learning effect than floored rooms.

Differences between Chinese and Japanese RushGrass
Recently, there are many cases of using cheap Chinese tatami-omote. However, it has the following drawbacks.
RushGrass is immature because the harvest time of RushGrass is about one month earlier than that of Japan. Therefore, the skin of RushGrass is soft and brittle.
In the process of drying RushGrass from Japan, it is slowly dried at a low temperature for a long time. do. As a result, the RushGrass dries out too much and leaves almost no moisture, causing the skin to become dry and fluffed, and the RushGrass to lose its original stickiness and elasticity.
Unlike Japanese crops, the quality of RushGrass is not uniform and the colors are different because the grass is not sorted by each farmer. Therefore, it is often dyed with chemical dyes, and if the color fades after shipping and adheres to clothes, or if it burns, it will be uneven and look very bad.
Recently, the technology and quality have improved compared to before, but it seems that the quality of RushGrass made in Japan is still lacking.

There are various other tatami-omote depending on the application.
In addition, there is a mesh table that is finer than usual, a Ryukyu omote that uses Rush Grass called Shichitoi, and a one that uses chemical fibers and Japanese paper, so that it can meet various needs. .

tatami-berivarious
Tatami-beri used to be made of cotton thread, but recently synthetic fibers have become mainstream.
The latter is cheaper and more durable, but in terms of texture, cotton thread is better.

There is also a high-class hemp-beri that uses hemp thread.
There are plain ones and patterned ones, and there is also crest-beri that is used for temples and alcoves.

Categories
About the manufacture of Tatami Rush mat 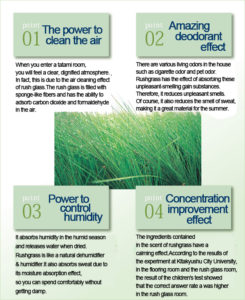 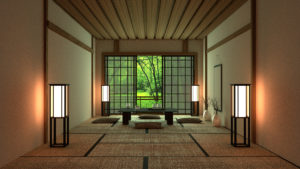 What are the characteristics of Rush tatami mats?