About the history of tatami mats
Introducing the historical background of tatami mats.
It dates back to the Nara period and the Heian period. From the Kamakura period to the Muromachi period, it was for the hospitality of noble people and guests, but in the Edo period, it was a flooring material for homes that was popular with the general public.
The thickness of the tatami mat and the pattern and color of the hem differed depending on the status of the user, as it was placed on the board as a seat or bedding.

What is placed on a wooden table called “Mitoko Tatami” is stored in Shosoin, Nara Todaiji Temple. There is a slight difference from the existing tatami mats, and 5 or 6 pieces of goza-like knitted mats are layered to form a tatami floor, which is covered with rush mats and has a brocade rim. Was there. I put two of them side by side and used them like a bed when I slept. The story of tatami appears in “Kojiki”, but it can be inferred that it was like the current tatami mat rush carpet. It seems that there was a tatami mat from 794 to 1179, but before that, it was treated like a tatami mat rush carpet.

From the Kamakura period to the Muromachi period, Shoin-zukuri was born and developed into a way to spread Tatami mats throughout the room. Until then, it was intended for the hospitality of noble people and guests, but it has come to be used as a flooring material for buildings. However, such usage is also a symbol of the wealth of aristocrats and samurai. During the Momoyama period and the Edo period, sukiya-zukuri and tea ceremonies developed and became widespread, and Tatami mats were gradually laid in the houses of the townspeople. Even so, the custom of restricting tatami mats by status remains, and it was not until the middle of the Edo period that it became available to the general public. People called tatami mat masters and tatami mat shops have been active, and the sights of houses drying tatami mats can now be seen here and there.

The Tatami mats of this era were a form of power. The Tatami mats were placed only where they were needed, rather than being laid out as they are today. When the aristocratic dwelling became a Shinden-zukuri, Tatami mats were laid between the boards instead of the cushions and bedding was placed around the house.

In the Heian period, the Tatami mats, which were used as cushions and bedding, will be used as flooring materials in the house from around this time. When the times changed and the building was made by Shoin-zukuri, Tatami mats, which had been placed only where they were needed until then, will be laid over the entire room and the entire floor. The Tatami mat craftsmen of this era came to be called “tatami mats” and “tatami mats”.

In the Muromachi period (around 1392)

In the Azuchi-Momoyama period (around 1573)

The tea ceremony developed from the Azuchi-Momoyama period to the Edo period, and the method of laying the Tatami mat changes depending on the position of the furnace. Around this time, Tatami mats gradually began to be used in townspeople’s houses.

In the Edo period, “Otami-bugyo” was created as a post, and it was cherished by samurai families and became especially important for shoguns and daimyo. Tatami mats became popular among the townspeople after the middle of the Edo period, and became more popular in rural areas after the Meiji era. In Nagaya, the person who rents the Nagaya prepared the Tatami mat by himself, and it was not originally laid. For that reason, the Tatami mat was very important, and the wisdom that it can be used for a long time while maintaining it was born. Until then, rushes used to be wild, but cultivation began in earnest, and in the latter half of the Edo period, Tatami mats were made as a living business by making Tatami mats. Craftsmen will be established and will be used in ordinary people’s homes.

Until then, the pattern of Tatami mats was restricted, but it was lifted, and after the Meiji Restoration, Tatami mats will be widely spread to the general public. It will be used with great wisdom, such as drying the Tatami mat to prevent it from hurting, and turning it over when the front of the Tatami mat is burnt.

With the period of high economic miracle, people’s lives will become Western-style, and the lifestyle of sitting in a Japanese-style room will change to that of sitting on a chair or sofa. Carpets and the like will become widespread, but the interior of the house was still based on the Tatami mat room.

Flooring has become widespread, and if you make a Japanese-style room when you build a house, you will need accessories such as shoji screens, and it is becoming more and more difficult to make a Japanese-style room to reduce the cost of building a house. ..
On the other hand, the flooring has the disadvantages of being cold in the room, making noise, and being uncomfortable, so the Tatami mat has been reviewed again. Tatami mats and Ryukyu Tatami mats that can be placed on the floor are gradually becoming popular. Scientific materials are also being used, and the functionality is becoming higher, and the popularity of Tatami mats is gradually regaining as we need them. 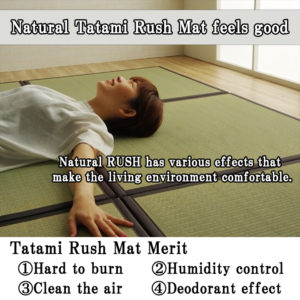 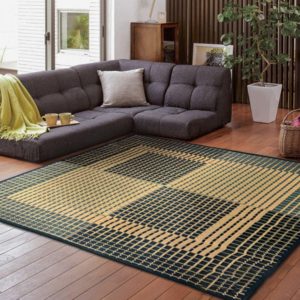