Japanese glass bloomed in Edo.
Edo glass feels cooler.
Its somehow simple taste comes from the fact that every step of the process is made by craftsmen.

What is the appeal of Edo glass?

Edo glass refers to the glass products that are handcrafted in Tokyo and other parts of Chiba, inheriting the tradition from the Edo period.
The products, which are entirely handcrafted by artisans, are never the same.
They come in a variety of colors and designs, but all have the warmth of handmade products.

There are currently three types of molding.

① Blowing into the air (chubuki)
② Blowing into a mold (Katabuki)
③ Pushing type (Oshigata)
There are three methods.

③ Pushing type (Oshigata)
Glass dough is poured into molds in a top and bottom set of pressed molds and then pressed and shaped.

The main part in the production of these products is handcrafted by Japanese craftsmen.

The Beginning of Edo Glass
The history of glass making in Japan dates back to the Yayoi period.
The techniques introduced from the continent led to the making of magatama and kudama (glass tubes) at that time, but these techniques died out after the Middle Ages.
It was not until the Edo period that the technique reappeared in Japanese history.
Glassware was introduced to Nagasaki from Portugal and the Netherlands, and it came to be made domestically under the name “biidoro”.
The technique itself is thought to have come from China, since it resembles Chinese techniques rather than European in origin.
The process was eventually introduced to Osaka, Kyoto, and Edo.
Glass was made for the first time in Edo around 1711.
A craftsman named Gennojo is credited with blowing glass in a collection of essays called “Ureshu-Yu-Souran”.
Also, a geographical journal of the Edo period, “Takie Chronological Table” (1751-1764), mentions that glass was made in the area.

Kagaya Kyubei carved the glass surface with Kongo sand in 1834.
This is said to be the beginning of the cutting technique for “Edo faceting”.
Later, under Kagaya, faceted plates, stacked boxes, food baskets, sake cups and glasses were made.
Kamisoya Rumusaburo sold glassware such as ornamental hairpins, wind chimes, kaleidoscopes, and kinkabachi (goldfish bowl).
As items to add color to the downtown area of Edo, these products exploded in popularity, and glass became familiar to the common people.
By the end of the Edo period, the art of faceting was introduced to Satsuma, and the feudal lord Shimadzu Saiko invited excellent glass artisans from Edo to Kagaya.
Under the leadership of Nariakira, the next lord of the Satsuma clan, the culture of “Satsuma faceting” blossomed.

The advent of the oil lamp that brightens the fateful night
Glass manufacturing technology developed with the import of Western civilization from the end of the Edo period to the Meiji Restoration.
In 1859, the Treaty of Amity and Commerce between the United States and Japan was signed and the Port of Yokohama was opened to traffic.
This led to the importation and rapid spread of oil lamps.
In the early days, only foreign-made lamps were available, but glass manufacturers such as Kagaya and Josoya began to manufacture the glass part of the new lamps.

In 1866, Kagaya Shobei and others began to make lamps, and both Kagaya and Josoya succeeded in making fire-covering ascidians in 1866.
This is how glass, born in Japan, became a light to light up the streets at night.

◯The first Western-style glass manufacturing plant in Japan starts in Tokyo.
Until the Meiji Restoration, Japan mainly manufactured small glass products such as daily necessities and lamps, but with the modernization of the country, the demand for large glass products such as plate glass and navigation lights increased.
In 1873, a private glass factory called “Kogyosha” was established, and in 1876, due to its importance, the government purchased it to create the government-run Shinagawa Glass Works.
Furthermore, in 1877, “Edo Glass” was exhibited at the first National Industrial Exhibition.
Two years later, in 1879, the Tokyo Steelworkers’ Association, a glass manufacturers’ association, was established. The association of glass craftsmen from the Edo Glass and invited British engineers attempted to manufacture plate glass, but it was not profitable, and the government-owned Shinagawa Glass Works was soon sold to the private sector.

The factory, now privately owned, succeeded in increasing its productivity. It manufactured water bottles, medicine bottles, tableware, and other products for the army, as well as various types of glass such as beer bottles. However, in 1892, the company was disbanded due to the effects of the Depression and other factors.

As a result, Japan’s first large-scale glass factory ended after a little more than 20 years, but there is no doubt that this factory improved Japanese glass technology and made Tokyo one of Japan’s leading glass producers.

Later, the Great Kanto Earthquake and the air raids on Tokyo during World War II damaged the factory in the city. Although the city was severely damaged, many factories were later rebuilt, and the tradition of Edo glass has been passed down to the present day.

Material
Silica sand, lime, soda ash and lead oxide are the raw materials.
Sometimes other raw materials are needed to give it color. 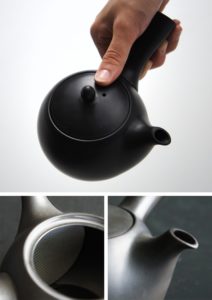 Want to find the perfect Kyusu Japanese teapot for you?

What is the secret of Tokoname ware Kyusu Japanese teapot, which boasts the largest share in Japan?